With faster fulfillment, the future is bright for sunglasses retailer Sunski 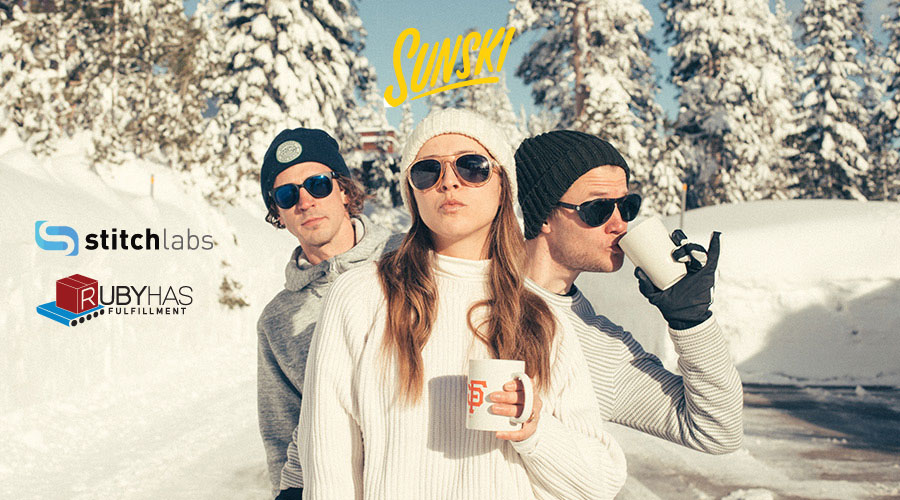 With faster fulfillment, the future is bright for sunglasses retailer Sunski

Sunski is shaving at least one day off its order processing time by using services from Stitch Labs and Ruby Has.

Online sunglasses retailer Sunski has been growing sales 20-30% each year since its launch six years ago, says Grant Mahan, head of sales operations at Sunski.

The brainchild of Tom Stewart and Michael Charley—two friends from college—the duo got the idea for Sunski after returning from a surf trip to Australia sporting wayfarer-type shades that generated buzz with friends and family. The pair raised $100,000 in a Kickstarter campaign to sell the glasses, which featured clear frames and colored arms.

The company has since swelled to 11 employees, added several other types of shades and now sells between 1,500 and 5,000 pair of shades a month online. The glasses, manufactured in China, cost $48, $56, $68 and $89. Today, Sunski sells direct online via Sunski.com as well as via wholesale to specialty stores and larger chains, such as Nordstrom Inc. No. 16 in the Internet Retailer Top 1000 and REI, No. 72. It also sells online internationally in countries such as Japan, South Africa and South Korea.

But as the retailer grew, it began experiencing growing pains—namely in the time it took to fulfill and ship orders, Mahan says.

“We shipped both wholesale and direct orders out of one warehouse locally (in San Francisco) and, as both businesses grew, we would see some bottlenecks for orders when we were really busy like during the holidays,” Mahn says. There would be a few-day delay (to get orders out), Mahan says—and that wasn’t working. “The way the consumer is today, based off of their experience with Amazon, is that they want a quick turnaround on their orders.”

Sunski began using Ruby Has about six months ago. Today, Sunski uses Stitch Labs as its order placement hub, meaning all orders flow through Stitch Labs and the vendor then routes direct orders to a Ruby Has fulfillment center and wholesale orders to Sunski’s center in San Francisco.

For now it only uses the Ruby Has Las Vegas distribution center but plans to use the vendor’s facilities on the East Coast when it begins shipping to the U.K. this summer. Since making the move, Sunski has significantly shortened the time it takes to get orders out the door, Mahn says. Orders placed before 1 p.m. local time go out the same day at both facilities now, Mahn says. “The old set up required at least one full day of processing time,” Mahn says.

Setting up the system took about three weeks and mainly consisted of Sunski sending product data to Ruby Has. Mahn says Stitch Labs took care of the integration between the two vendors’ systems.

Another benefit of the new service—and the integration between Stitch Labs and Ruby Has—is that it allows Sunski to easily pull from direct inventory to fulfill wholesale orders and vice versa, Mahn says.

“Having two fulfillment centers integrated with Stitch Labs makes it easy to transfer inventory from one to another,” Mahn says. Staff can see all inventory at both centers and then select the units they want to move from one facility to another. When a transfer is initiated, Stitch Labs sends an advance shipment notice to let the facility know to expect the order along with order details.

Sunski pays Ruby Has a monthly fee based on the amount of space its products take up in the warehouse and a per-order picking and packing fee of a few cents.

Launched in Sweden, Oatly has since expanded internationally, coming to the U.S. in 2018. Stitch Labs and Ruby Has have provided it with the necessary software and fulfillment services to help it scale.

“Oatly started working with Stitch Labs and Ruby Has at a time when our business was really expanding and we were looking to take the next steps in merging inventory management with our 3PL and ecommerce platforms,” says Mike Messersmith, general manager at Oatly. “We have enjoyed working with these teams and have seen a huge positive impact to our business. We would look to expand even more in the coming years.”

Stitch Labs says it integrates with ecommerce, POS, shipping and fulfillment technology companies, including Amazon (No. 1 in the Top 1000) and eBay Inc. (No. 5 in the Internet Retailer Online Marketplaces), and ecommerce platform providers Shopify, Magento and BigCommerce. It also integrates with shipping software provider ShipStation, payment processor Square, supply chain management and logistics companies SPS Commerce and DCL Logistics, as well as accounting software including Quickbooks and others.

Learn more about Ruby Has Fulfillment’s partners including Stitch Labs: